About 50 Porteños joined forces to clean up the beaches in Puerto’s downtown area.

Check out some photos of the April 7th Puerto Armuelles beach clean up, below.

With the recent storms, much more garbage than usual ended up on our beaches. This was especially true in the Puerto Nuevo neighborhood.

Click on any photo below to start the slideshow.

This well-organized event was sponsored by Activo Club 20-30 and the students from the Institute of Puerto Armuelles (a high school).

They supplied trash bags, water, and even gloves.

The sponsors did an excellent job collecting the dozens of bags participants filled with garbage.

According to Wikipedia, Active 20-30 is an international service club focused on helping children and developing leadership skills in younger adults ages 20–39. In Latin America the group is called Activo 20-30 Internacional. In the United States and Canada the organization is called the Active 20-30 Club.

The Puerto Armuelles’ Club Activo 20-30 has been active since it was formed in 1980. Check out their Facebook page here.

The number of community cleanup have been steadily increasing in Puerto Armuelles (and throughout Panama).

Just a couple of months ago, on February 26th, there was a community clean-up of the stretch of beach starting at the mouth of the Rabo de Puerco river (pig’s tail) in Rio Mar through Pueblo Nuevo and ending at the downtown pier.

The Feb. 26th cleanup was organized by the Ministry of the Environment in Puerto Armuelles (MiAmbiente).

A ton of trash was picked up: mostly plastics along with aluminum cans, glass, cardboard, and more.

About Trash in Panama

Litter and trash is an issue through much of Central America.

You only have to visit to quickly realize that Central Americans, including Panamanians, seem to have a higher tolerance for litter and debris than most North Americans.

There are a number of reasons that there is much more litter and piles of trash in Panama than there is in the States.  Thankfully, efforts to combat litter and pollution are growing both in the Panamanian government and in the community.

Find out more by reading my article about trash in Panama.

As Yilka Aguirre, regional director of MiAmbiente, said after the Feb 26th clean up in Puerto Armuelles:

“This cleaning day is done several times a year.  It is not a solution, but it is a great contribution to the planet. We must encourage the correct handling of the waste because the garbage that we place incorrectly reaches the rivers, seas, and oceans.”

I wish I had been in town to help with the cleanup.  I have a friend to thank for the photos and her sense of the community event.  Thank you!

Get our monthly newsletter and keep up-to-date on Panama news.

My family is from Panama and I live in the US and we would like to visit Panama December 2019. That being said we are going to be staying in Panama City and David. Is there somewhere to sign up or find out more information for cleaning up around the water areas?

"It’s okay to say no to things that drain you. Show up to what really matters." ~Michelle Maros 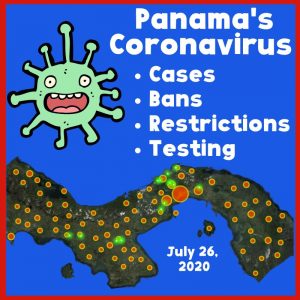 I just published a book! It explores everything you need to confidently buy Panama real END_OF_DOCUMENT_TOKEN_TO_BE_REPLACED

Updated: April 30, 2020 US Congress has passed the Coronavirus Aid Relief and END_OF_DOCUMENT_TOKEN_TO_BE_REPLACED

UPDATED: April 22, 2020 Panama had initially closed its airports on March 23rd for 30 END_OF_DOCUMENT_TOKEN_TO_BE_REPLACED

March 15, 2020 Important travel news about travel in and out of Panama. The most recent END_OF_DOCUMENT_TOKEN_TO_BE_REPLACED

Are you an American? Are you a Democrat? You can vote in the Democrats Abroad END_OF_DOCUMENT_TOKEN_TO_BE_REPLACED

A heads up, when you buy property in Panama. Many lawyers will urge you to create a END_OF_DOCUMENT_TOKEN_TO_BE_REPLACED

People who live cross-culturally, for any significant portion of their lives, are END_OF_DOCUMENT_TOKEN_TO_BE_REPLACED

Almost all properties purchased in North America are financed. That is not the case in END_OF_DOCUMENT_TOKEN_TO_BE_REPLACED

Have you decided to buy a Panama property? Most likely, you have never bought an overseas END_OF_DOCUMENT_TOKEN_TO_BE_REPLACED