My kids, especially my younger one, are jumping out of their skin in excitement.

The costume, the trick and treating, trading candy after trick or treating, they love it all.

One of the challenges bringing up kids in a foreign land, is sharing the joys of your homeland’s holidays.

If you are an American, Halloween is one of those holidays.

Schools sometimes have costume contests. In places with more Americans, there are some festivities.

For instance, the Multi-plaza Mall in Panama City has trick or treating and a costume party every year. I’ve never been, but according to Chris at PanamaForReal.com, it isn’t the most scintillating event.  But it is an event.

The more American residential enclaves in the city also have trick or treating, but it is for residents only.

This year in Boquete there is a Halloween party at Skate World.  They are going to have 2 events, one for kids and one for teens.  Having one in each category myself, I applaud that idea.

There may be something at Chiriqui Mall in David, but I am not sure about that.

In towns with few Americans, there are no events.

Our Halloweens In Panama

Over the years we have tried our best to create our own Halloweens.

I love carving pumpkins.  I love the way they are transformed at night when they are all lite up.

Unfortunately, Panama does not grow any pumpkins.

If you want to carve an actual pumpkin, Pricesmart often sells them around Halloween. They charge a pretty penny for them, but sometimes you just want one.

You can also use some of the many calabazas grown in Panama.  A popular one, which is shown in the photo above, is called zapallo.

FYI: You really don’t want to leave your carved pumpkin out too long, unless is it well outside.  This is the tropics.  If you leave food out, something or other will invade and start eating.  You many not want what shows up for dinner in your house.

Some years we have Halloween parties. One year we even created a Haunted House.

It can be challenging to recreate the sense of excitement and anticipation of a Halloween in the States.  This challenge is made even harder since none of our Halloween party-goers have ever been fellow Americans.

Recreating an event that mystifies most of the participants, is not an easy task.   The people who come to our Halloween parties are mostly Panamanians with a German or two in the mix.  However, our German friend really embraced the concept of the Haunted House and greatly improved the one we had.

Most kids in Panama are fantastic at the candy grab. Years of birthday party pinatas and candy thrown from parade floats have made kids here very skilled in the art of grabbing as much candy as possible as quickly as possible.

As my daughter says about candy and pinatas

“It is war. And it is fun.  You try to grab as much candy as possible, but no one holds a grudge after”

But trick or treating is different.  The candy grab instinct can be hard to quell.

For trick or treating, the adults usually take up stations in various rooms in our house.  Then the kids knock at each door and say trick or treat.  Even after reminding kids to take only 1 or 2 candies, the kids, especially the younger ones, grab as big a handful as possible.  But they tend to quickly get with the program.

My husband likes to lay scary traps for them while they trick or treat.  He has a great time.

We also usually do some games like dunking for apples, telling mildly scary stories, and maybe a board game.

There isn’t much post trick or treating candy exchange though.  With everyone getting the same candy, and there is usually more candy in the closet, there is no point.

It isn’t the same as Halloween in the States. There is no of the gang of kids in the dark laughing and running from house to house.  No anticipation of what the next house will give out, of what scary thing they may have in their yard.

But the kids love it.   It isn’t the full experience.  But it is Halloween.

In the end they score alot of candy.  Which for kids is always a highlight.  .

Trying to recreate Halloween is great fun.  It will also help kids feel less like a fish out of water when they visit their cousins and friends in the States.  Especially now with Halloween becoming one of the most celebrated holidays in the US.

Do you do Halloween in Panama?

March 28, 2020 US Congress has passed the Coronavirus Aid Relief and Economic END_OF_DOCUMENT_TOKEN_TO_BE_REPLACED 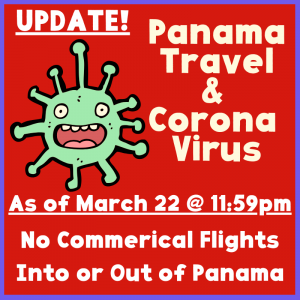 March 15, 2020 Important travel news about travel in and out of Panama. The most recent END_OF_DOCUMENT_TOKEN_TO_BE_REPLACED

Are you an American? Are you a Democrat? You can vote in the Democrats Abroad END_OF_DOCUMENT_TOKEN_TO_BE_REPLACED

A heads up, when you buy property in Panama. Many lawyers will urge you to create a END_OF_DOCUMENT_TOKEN_TO_BE_REPLACED

People who live cross-culturally, for any significant portion of their lives, are END_OF_DOCUMENT_TOKEN_TO_BE_REPLACED

Almost all properties purchased in North America are financed. That is not the case in END_OF_DOCUMENT_TOKEN_TO_BE_REPLACED

Have you decided to buy a Panama property? Most likely, you have never bought an overseas END_OF_DOCUMENT_TOKEN_TO_BE_REPLACED

The video, below, is a tour of a delightful property. This property is located in the END_OF_DOCUMENT_TOKEN_TO_BE_REPLACED